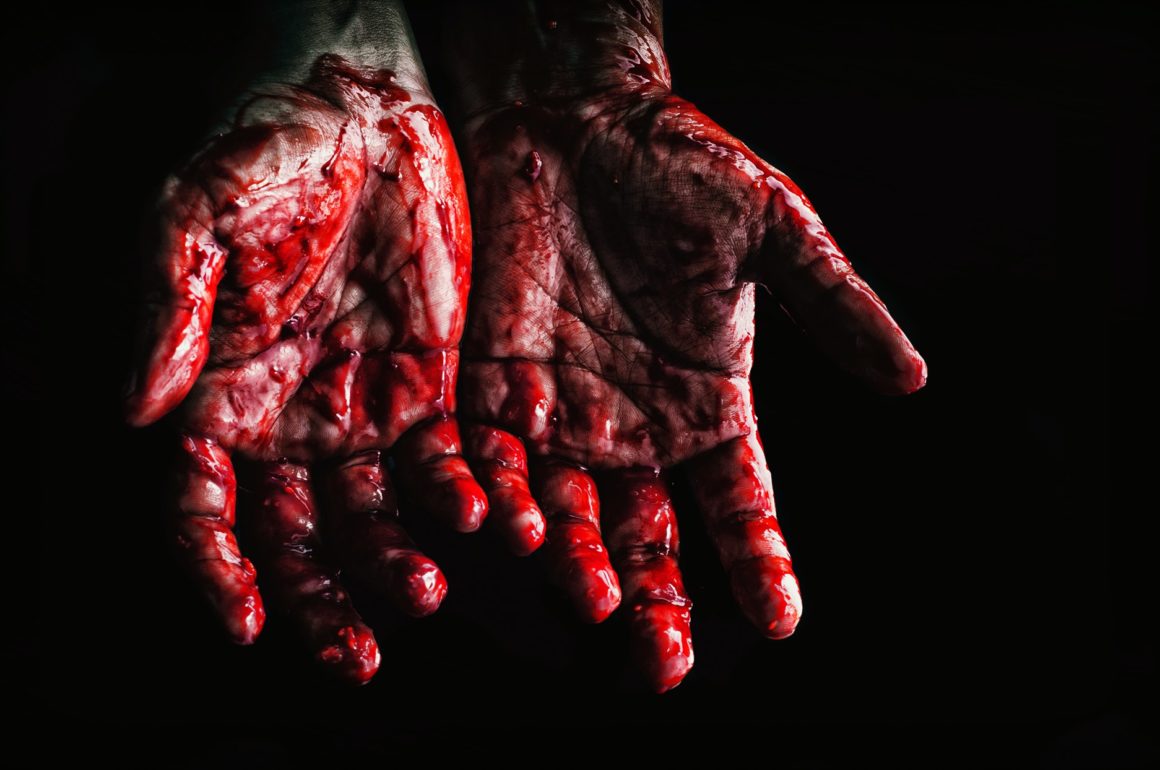 A bloodstained rock, 2 three-inch nails, a plastic bag, and some tissues. These are the objects which a doctor extracted from the genitals of a 27-year-old Tigrayan woman on the 17th of February 2021, after she had been repeatedly abused by several soldiers for the preceding 11 days. According to France24, she was on a bus in Mekelle, the capital of Tigray, when she was stopped and abducted by Eritrean soldiers. After the 11-day ordeal, she was abandoned by the side of a road where she was found by civilians the following morning and taken to hospital.

Since the Ethiopian National Defence Force invaded the northern Ethiopian province of Tigray last November, the number of women with similarly harrowing stories to tell has likely risen to the tens of thousands. The number of people subjected to various kinds of sexual abuse suggested by UK MP James Duddridge is as high as 26’000. Official figures are also bound to underestimate the true numbers involved.

While feelings of shame, stigma, and pointlessness make rape a highly underreported crime anywhere, currently in the region of Tigray, real numbers are even more difficult to point down because of communication blackouts, transportation blocks, an inadequate healthcare system, and, crucially, threats of retaliation by perpetrators. In the countryside, where both cultural and communicational difficulties are exacerbated, underreporting is likely to be even more severe. 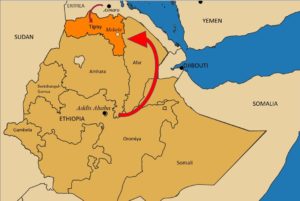 A map of Eritrea with the northern region of Tigray highlighted in Orange. The coordinated invasion started in Ethiopia and Eritrea. Invading forces quickly advanced into Tigray.

The language used by the perpetrators deserves our attention. What is being employed is the language of genocide. There is mounting evidence that rape in the region is being systematised, strategized, and weaponised: carried out with the aim of inflicting lasting damage to everything it means to be from Tigray. The recent report by Eritrea Focus and Oslo Analytica highlights that sexual violence in Tigray meets the criteria to be considered genocidal “in that it caused bodily and mental harm and prevented births among Tigrayan women”. The report continues: “the language reported being used by the attackers also makes it clear that the aim was the destruction on the Tigrayan community.”I had the fortune of speaking with Rowena Kahsay of the youth-led NGO Tigray Youth Network (TYN) about what is happening in her home region. Rowena was in Tigray when the Ethiopian invasion started in November and was able to return to the UK several weeks into the fighting. Since she left, she has had contact with relatives and acquaintances in Ethiopia. 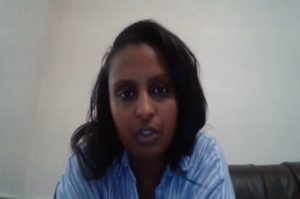 “The things that they do are beyond comprehension, beyond what a normal mind can think of to inflict pain”

The genocidal aspect of weaponised rape in Tigray was a major theme of our interview. Rowena told me that there are countless reports outlining how the conflict has disproportionately affected women and girls. In a combination of anger, grief, and outspoken confidence, she explained:

“when invading Ethiopian, Amhara and Eritrean forces rape these women and girls, they do it with the intention of cleansing the bloodline, eradicating Tigrayans, changing their ethnicity for generations to come. It’s done with the intent of ethnically cleansing the people, to terrorise the population, inflict unspeakable violence and horror”

Rowena pointed out that in her home region, as in other developing countries, local communities are “incredibly matriarchal” and that “it’s the women who safeguard the community”. She said: “women are the protectors of our culture, our existence, our identity.” Systemic rape as we see in Tigray is so significant because it is intentionally done to “rob the community of what it means to be Tigrayan”.

Rape, it seems, is being weaponised on at least two levels. On a psychological level it is carried out with goal of inducing lasting terror and shame on Tigrayan identity, whereas on what perpetrators consider to be a “genetic” level it is carried out to eradicate Tigrayan “genes”. According to the report by Oslo Analytica and Eritrea Focus, a young woman, whose vagina was cauterised with a hot metal rod by Amhara militia, was reportedly told by the soldiers “You did nothing bad to us… our problem is with your womb. Your womb gives birth to Woyane. A Tigrayan womb should never give birth”. 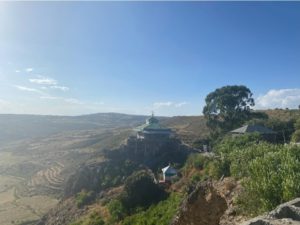 Sexual violence in Tigray is as widespread as attempts by perpetrators to cover up their crimes. There were several occasions where soldiers shot, attacked, or threatened people who tried to help victims or if the victims themselves sought help. France24 reports that the 27-year-old woman who was gang-raped for 11 days said her ID was photographed and was threatened to be killed if she spoke about what had happened to her.

Allegedly, she is now in safety along with her children. The age range of rape victims is sickeningly broad. Rowena told me: “the things that they do are beyond comprehension, beyond what a normal mind can think of to inflict pain. They would tie women up, they would gangrape them. The youngest of the victims were 7 or 9, the oldest in their 90s”. Disturbingly, there were also occasions in which male family members were forced to rape their female relatives at gunpoint. In Abbiy Addi, according to the Oslo Analytica and Eritrea Focus report, a grandfather was shot for refusing to rape his own granddaughter.

As Rowena explained, “genocide does not take place in a vacuum”. She argued that while the catalyst of the invasion was the regional election which took place in Tigray last September, ongoing violence emerges out of a context of “intent, language, normalisation, casual violence” against Tigrayans for the sole reason of being Tigrayan.”

After everything she has seen and heard, Rowena can’t consider herself “Ethiopian” anymore. “Whatever it meant to be Ethiopian died in me in November… My homeland was under attack by the people who I considered to be my countrymen and women… These people who are not only killing us, but who are delighted in killing us. 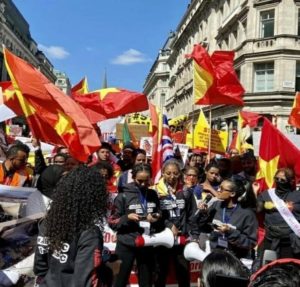 What next for Tigray?

Rowena said the situation in Tigray had deteriorated since she left. The ignorance is bliss attitude of the early days gave way to anger and belligerence, as the realisation that nothing is too low for these people set in. Shortly after she left, invading forces occupied Mekelle, imposed a curfew and a shoot-to-kill policy for breachers. At the same time, reports of rape, looting and theft in the capital kept piling up. The luxury of mourning, I was told, was put on hold, but Rowena was hopeful that there would be peace, justice and retribution and that her organisation could make a difference.

Since I spoke to Rowena, Ethiopia’s warring parties have agreed to something resembling a ceasefire and the Tigrayan Defence Forces (TDF) have recaptured Mekelle. The TDF and invading forces are in the midst of what promise to be long and complex negotiations. As the two sides accuse each other of human rights abuses and war crimes, an endless string of complications makes the conflict a diplomatic goliath. These include millions displaced, millions on the brink of famine, rampant theft and looting, widespread substandard access to water, medicine and sanitation, and an epidemic of genocidal sexual violence whose victims are now in the thousands. 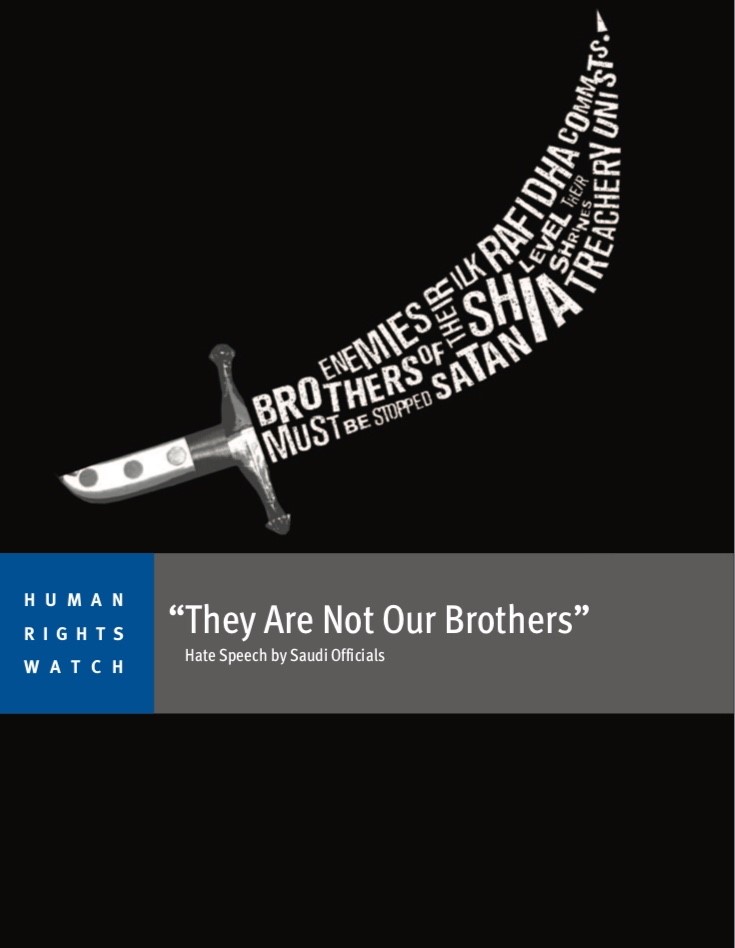